This is the part of the show where Heather comes out and gives a her little rant. Apologies in advance for any offence taken. (I intended to, though, you know). It is a rant. WARNING: not terribly gracious, but, ahem, true. 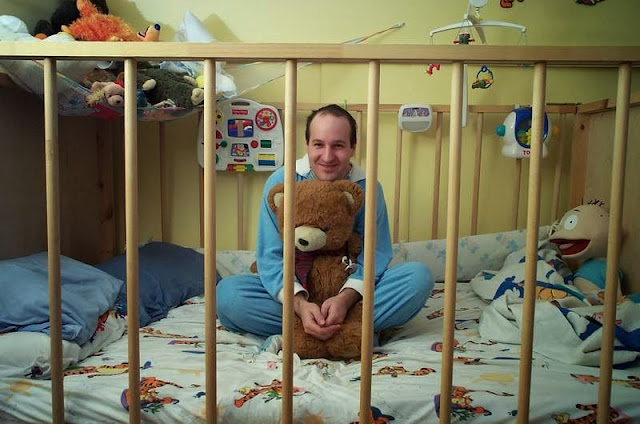 I grew up a child of the eighties and can still recall the television ad for a major toy store chain: “I don’t wanna grow up; I’m a Toys-R-Us kid!” I have on more than one occasion wondered if that little jingle, embedded in the sub-consciousness of millions of children now grown up, has contributed to the way we view the division between childhood and adulthood today.

In our culture, there is a new phenomenon: the thirty-five year old male who lives in his mom’s basement, still depending on her to do his laundry, make his breakfast, and wipe his nose. Although he reached adulthood way over a decade ago and is physically and mentally strong enough to get a job and secure an apartment for himself, he has for some reason failed to get moving.
Although there have been a plethora of books and articles written about this subject, there is a sister subject in the church that has been addressed far less: the phenomenon of the bottle-fed, pablum munching Christian. The believer in Christ, who although having walked with God for many years, is still eating and acting like a brand new Christian. And like their secular counterpart, they seem perfectly contented to stay that way!
I like to call this Peter Pan Christianity. You never have to grow up!  You never have to face responsibility, never have to work, never have to serve others. Like a child, you believe life is one big opportunity for self-fulfillment, and self is what innocently consumes your thoughts and attentions all day long. Myface anyone? :)

How is spiritual maturity supposed to work, then?
When you placed your trust in Jesus Christ, you became a new creature, born a citizen of a new country... the Heavenly country. The Bible calls this the “Kingdom of Heaven”.  Currently it remains invisible to our eyes, waiting in the spiritual heavens above, but will someday be revealed on earth and become just as tangible and physical as the room you are sitting in.
Just as babies are cared for in the physical realm, spiritually, new Christians need to be nurtured and fed, taught and directed, by those more mature in faith. There is no expectation upon them to care for themselves or others. They are dependents, and that is God’s perfect design.
But babies don’t stay babies, do they? Like earthly children, believers will continue to grow, and through the process of discovering their interests and abilities, will begin to see beyond their state of childhood dependence to a time when they themselves will be able to serve others in a unique and special way.
When a young person discovers the direction they want to go with their lives and set off from their childhood home in pursuit of it, we would say that they have reached adulthood. Likewise, a believer should eventually reach the point in which they are ready to step out in faith into the calling and plan that God has upon their life.

How then, does it happen that so many in today’s churches are “failing to launch” out into real life? Is it for want of good Bible teaching? Is it for want of doctrinal training? Is it for lack of accountability? What is causing this stunted growth in the body of Christ?
One of the greatest factors involved in maturity in general is a gradual realization and awareness of both abilities beyond current expectations as well as opportunities to venture beyond current abilities. In other words, a teenager wants to go to a movie with friends. No one can drive him. After sulking for a while, he suddenly remembers that he is able to read road maps, and all at once realizes that he is capable of planning a route to a destination within his city, such as that movie theatre across town.
Epiphany: he can get there himself! He possess the reading, logic, and navigation skills to accurately interpret a common road map. The idea dawns: “I can get where I want to go without someone else taking me there.” Then the opportunity to expand current abilities reveals itself in the form of a bus ticket.  He goes online to find out how to purchase one and how to use it. He locates bus stops along the route he intends to follow and notes the time schedule they follow. He is going to the movie! The motivation of independent travel and a hot new flick is sufficiently compelling to pursue further education and take a healthy risk in the way of independence. Launch!
Same scenario, except one thing: insert mom. Mom is worried. She is not sure this is a good idea. This is something new... this is something risky. A new surge in the direction of independence, something she isn’t sure her son should have just yet. She is afraid. After some arguing, the adventure is vetoed.  She explains all the dangers of such an adventure, the things that could go wrong, and the incredible inconvenience of navigating a bus route. She effectively communicates her message: bad idea, utterly unpleasant, and way too dangerous. Not worth the effort and too risky to merit the chance. No, she will change her plans to drive him to the theatre herself, or will rent him a couple movies instead, along with snacks and drinks, and yes, even a few friends. Anything, anything, but the risk. Twenty years later, and...

The same crippling effect happens in churches. In an effort to remain open and gracious to everyone, the Word of God is regularly softened and the expectations for righteousness lowered, lest anyone perchance feel “condemned.”  As there is no condemnation for believers anywhere in the Bible, perhaps what is being avoided in the scriptures is actually “conviction.”
Conviction is the work of the Holy Spirit through the Word of God to effect heart change in a person. When pierced by a scriptural truth, a person is compelled to advance in their walk with the Lord by letting God alter something in their life. It is what the Bible calls “sancitification” and it is an ongoing process for every Christian. Jesus said to His Father, “Sanctify them by Your truth; Your Word is truth.” (John 17:17)
But what if every time a believer senses the conviction of the Spirit, everyone around them tells them to ignore it, for fear that it will either drive that person away from a friendly God or drive them into legalism? Pastors soften the application of hard passages. Home group leaders explain away various “personal convictions” held by group members lest anyone feel uncomfortable or judged. We comfort our friends when they are feeling guilty from besetting sins by comparing their sin to a worse one, and thus justifying them through moral relativity. And we avoid speaking truth when it is needed lest we offend someone.
My husband once said, “Don’t take the bite out of a passage that God gave teeth.”
By taking the “bite” out a passage that God intended it to have, we are neutralizing the power of God’s Word to change hearts, sanctify souls, and mature believers.
Rather than avoiding hard subjects, softening difficult truths, or dancing around issues of sin and righteousness, we should let the Holy Spirit accomplish His work of conviction and sanctification without our hovering involvement. God can and will accomplish this maturing naturally, just like a child will mature naturally if they are allowed to grow, take risks, make mistakes, and learn from them... if we let them!
Let the Word work itself out in a person’s life and they will grow up. Feed them pre-masticated, processed, and sweetened baby food and they will become stunted in that growth process. Like middle aged men living with their mamas, they will never grow up to become what God intended for them to be. Oh, the possibilities of service in the kingdom of God!

When I was growing up, it was regularly communicated to me that I could become anything I wanted to be when I “grew up.” Well, the opportunities for serving the Lord are even more endless and God has callings that are uniquely tailored to match each indivual’s desires, background, make-up, talents, and character. God has a highly specified life purpose for each one of us, designed to fulfill our deepest longings for purpose and meaning, not to mention adventure and challenge.
If you are still nursing a bottle spiritually, consider tossing it in the garbage can and grabbing your Bible. Listen to teaching that covers the whole Word of God, not leaving anything out nor frosting over anything difficult or hard to hear. Learn how to study your Bible inductively, feeding yourself like an adult. God will do the maturing work in you as you let Him.
Peter Pan was cute as a kid, but a grown up who eats “mum-mums” and still wants to play in the nursery all day is what those in “special needs” ministry politely call “developmentally delayed.”

Failure to launch out into the wonderful life of service available for all in the body of Christ is a condition that can be remedied by simply responding to the conviction of the Holy Spirit right now, and asking the Lord to effect a change in your heart, giving you a desire for His Word and a desire to grow.  Keep a soft heart and welcome His conviction when it comes. Think of it as growing pains. It is a healthy side effect of maturing.